In January 2021, Mount Sopris geophysicists Anne Chamberlain and Lia Martinez visited our customers at the Southwest Florida Water Management District (SWFWMD) in Tampa Bay to give a training on the well logging equipment and vehicle they had recently purchased. The SWFWMD had previously purchased equipment from a different manufacturing company and was dissatisfied with the customer support and training provided, so they had decided to take a chance and change vendors.

They purchased a new, custom-designed geophysical well logging van complete with extendible boom, generator, and a comfortable air-conditioned and heated logging bay. The vehicle was integrated with the following new equipment purchases:

In the morning, Anne discussed the various components of the custom logging van. She walked through how to turn the generator on/off as well as which electronics run off the generator battery versus the engine battery. She showed how the boom operated and recommended not extending the arm to its furthest extent if using a heavy tool stack.

Anne and Lia then explained the various components in the logging compartment of the vehicle. Anne described the process to reset the depth on the winch control panel as well as how to change the display to show either depth or speed. She then opened the USB with the tool configuration files and showed the SWFWMD customers how to install them into LoggerSuite software. After installation, she walked through each section of LoggerSettings and then Logger including how to use Toolstack Factory.

Throughout this process, Lia was talking with other members of the field logging and data processing teams and answering any questions they had about the equipment. It was very useful to have two trainers to answer questions.

Next, they hooked up and turned on the equipment, beginning with a Caliper stacked with Gamma (GR). It was emphasized to ensure the connections are threaded correctly, especially between two tools, to prevent them from getting stuck together and to be sure to remove all tops and bottoms from the tools when not in use. The Caliper and GR downhole probes turned on and worked as expected.

Then, the fluid temperature and fluid conductivity (FTC) tool was stacked with the Induction tool. It turned on and worked as expected. The group took a one-hour break for lunch.

After lunch, Lia presented 3 PowerPoints discussing the theory of resistivity, gamma, and sonic sondes as well as data processing and interpretation. After the presentations, the ELOG and bridle were connected to the logging system. Anne pointed out the sections of the tool that need to be covered by electrical tape prior to logging. The tool powered on and worked well during these tests.

The team met at the main office at 7 am, then travelled to the well site 30 minutes away to the south of Tampa. The first tool logged was Fluid Temperature and Conductivity (FTC) tool stacked with a 3-arm Caliper. Lia and Anne showed the team how to calibrate the caliper tool in LoggerSuite using the calibration jig. The FTC measurements seemed reasonable. The caliper measured around 11.5 inches when the expected measurement was 6 inches. After some back and forth and Lia checking the calibrations again, the discrepancy was pinpointed due to misreading the well diagram. The actual borehole diameter really was 11.5 inches. 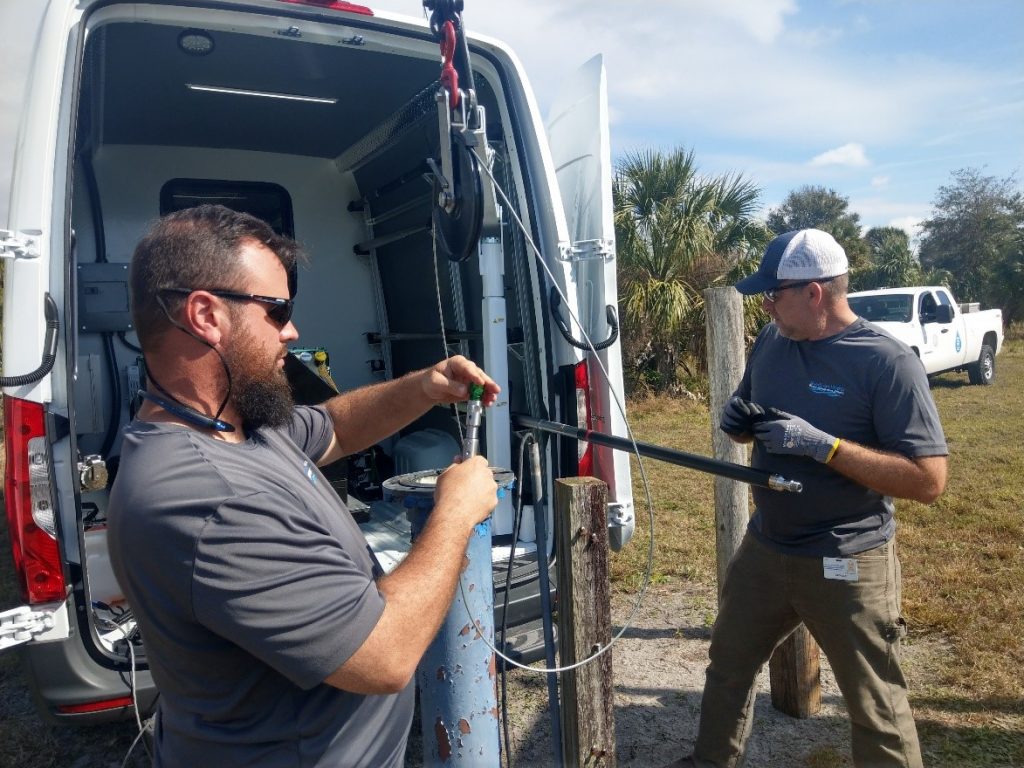 Next, the team stacked together the Induction and GR tools and began showing how to calibrate the Induction sonde. The Induction tool needs to be temperature stabilized in the borehole for ~15 minutes before calibrating. Two calibration rings of varying values are provided with the probe.

Before logging, Lia also opened WellCAD Browser and connected it to Logger. The tools powered on without issue, and the measurements seemed reasonable for the area. The customer was very interested in purchasing the Browser module after seeing it used in the field.

After logging GR and Induction tools, Lia walked the team through the troubleshooting process. She showed them how to check for cable leakage using multimeter provided in the 5TKA toolbox, as well as testing voltage at the cable head. She also demonstrated how to check electrical continuity and voltage along the entire winch system, cable by cable, and through the terminal block a and slip ring connector to determine where/if there could be system failures.

The team then connected the ELOG and bridle to the logging system. Electrical tape was wrapped around the cable head and 21 ft up the wireline. This is the standard operating procedure for SWFWMD. Lia demonstrated how to validate ELOG readings using the calibration & test box. The tool functioned as expected and measured reasonable values downhole. 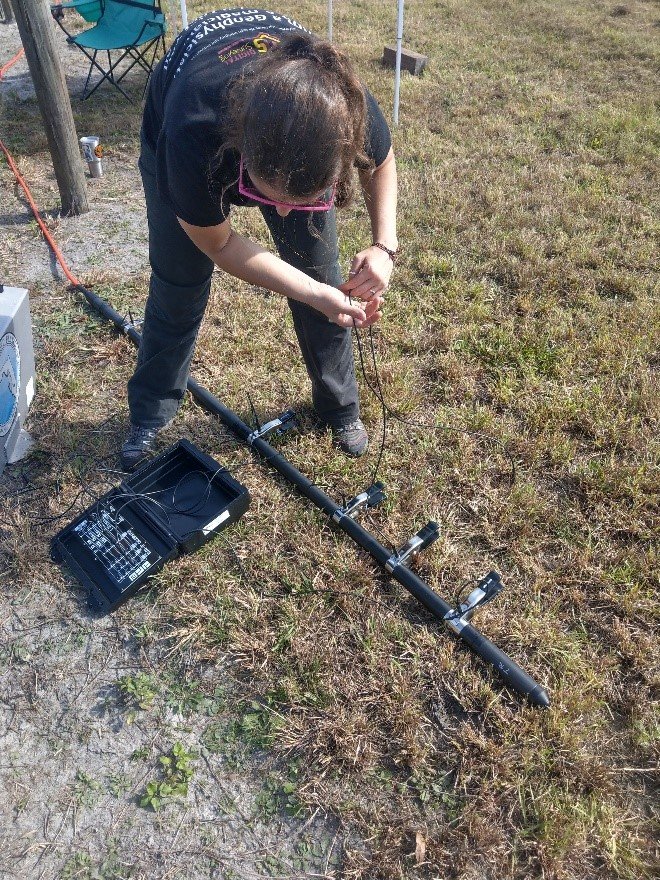 After removing the ELOG from the hole and disconnecting it from the logging system, Anne demonstrated the new MSI360 Digital Camera. Everyone present was able to connect their phone to the control box and stream the video using the camera’s built-in WiFi. They recorded 10 minutes of footage both up and down the borehole. Going down, the borehole walls were clearly visible and the SWFWMD employees were impressed with the image quality in comparison to their current coaxial-cable-based camera system.

After solving some technical difficulties in the conference room, Anne provided WellCAD Basic training to 6-8 employees. The training included the following:

In the afternoon, the group imported the data sets collected in the field the previous day. Anne showed the group how to:

Very quickly at the end of the day, Lia demonstrated the new capabilities of the Full Waveform Sonic module in WellCAD version 5.4 to the data processors.

Everyone from the SWFWMD training, Anne, and Lia shared some beers on Thursday evening after 3 days of training. Everyone had a great time and Anne introduced Lia to the special delicacy that is boiled peanuts.