It covers topics ranging from the best borehole image logging methods for mining, to contract law as a logging service company, to an in-depth discussion of Rock Mass Classification using wireline log data.

The following are some of the highlights:

“Of all the physical property logs, [density] is the toughest to get right. It is perturbed by varying borehole conditions and formation chemistry. It also suffers from resolution issues; each 1 cm datum describes the average density of a sample of data, depending on source‐detector separation. Boundaries between very different rock densities are not sharp.

Borehole image logs are fundamentally different. Notwithstanding the effects of magnetic formations on its orientation, the image describes the formation reliably, repeatably and at very high resolution. The [exploration geologist] is comfortable with image data. He knows enough about his ground to recognize if anything strange or unbelievable is described. His instincts can be trusted, whereas he might sometimes feel technically enfeebled when presented with a page full of wiggly lines. The NMR log, discussed last month, is an example…great technology, important measurement, but, in terms of data fidelity, the geologist depends entirely on his logging contractor who depends very much on his equipment supplier.”

“There are a few limitations to the Acoustic Televiewer

Given a good quality data set, the log analyst can describe formation texture, bedding dip and direction, fracture orientation and aperture, stress‐related breakout, fracture frequency, depth and thickness of target layers such as coal seams and he gets an acoustic caliper and borehole navigation log as a bonus. It is important to recognize drilling‐induced events on the images. Drilling‐induced fractures normally propagate parallel to the path of the bore and are usually orientated roughly in line with the prevailing stress tensor. Including these DIFs in a fracture count would be misleading.” 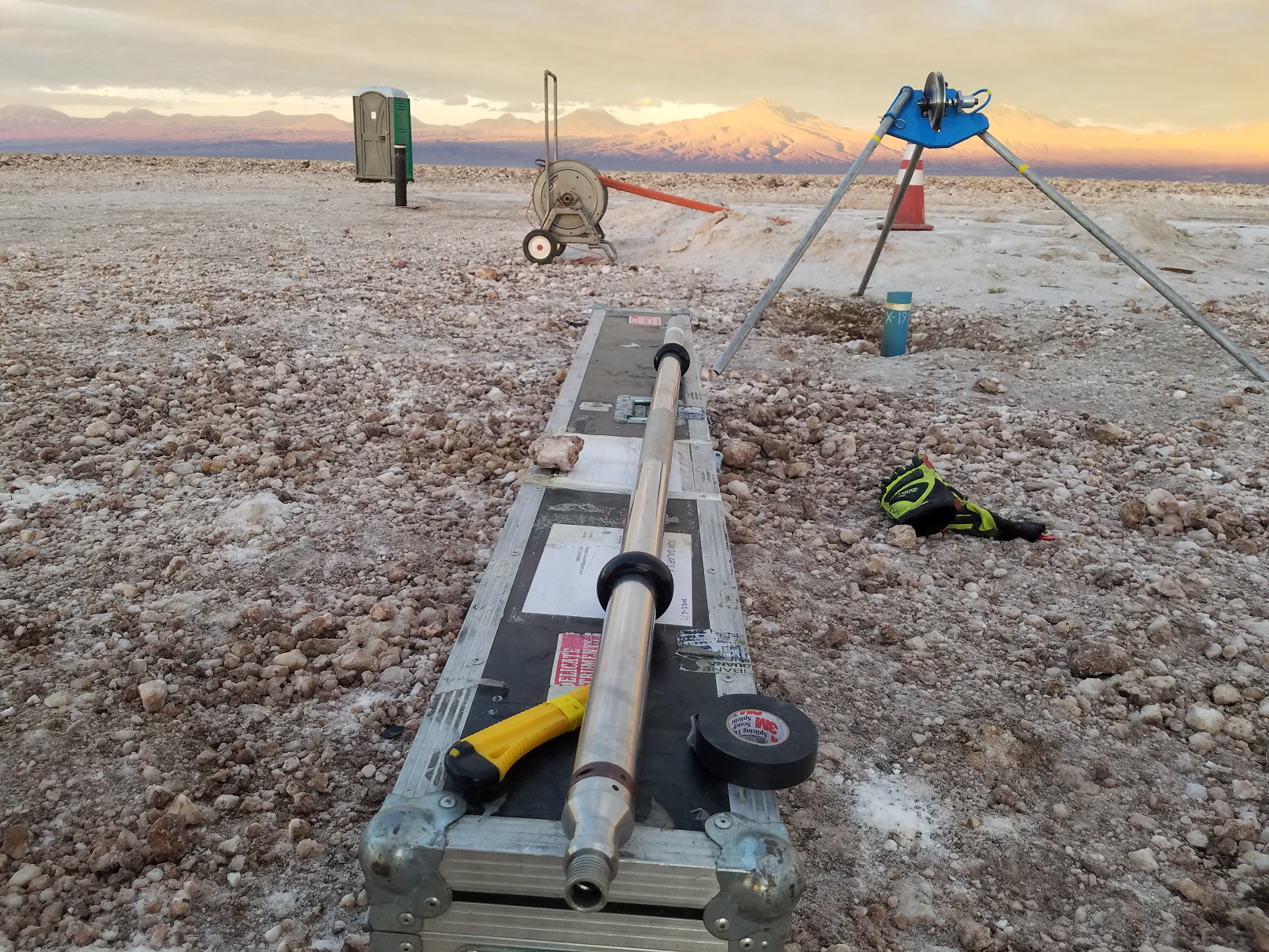 Mount Sopris/ALT are often recommending that our service company customers include an addendum to their contracts that their clients must sign acknowledging that if the tool is damaged or lost in the borehole, they will need to be compensated by their client. Legalese is not always the most interesting reading, but protection of your investment long term is important for the growth and heath of a small business. The following is an example of the wording that would be necessary in these contracts: Upper 250m of a borehole drilled in the Bushveld Igneous Complex, in Rock Mass Characterization article.

This final article entitled “The Use of Wireline Geophysics in Rock Mass Characterization” by Neil Anderson and Julian Luyt is a topic of special interest for many of our customers.

“During the design phases for the extension of an existing open cast or underground mine there is often very little detailed information available on the rock mass characteristics, in situ stress, rock strengths and hydrological characteristics for the evaluation of the project. Geotechnical core boreholes would now be drilled and geotechnically logged to determine the rock mass parameters required. Multi‐parameter Rock Mass Classification schemes such as those developed by Bieniawski (1989), Laubscher, (1977), Barton et al., ( 2002), Andersen (2015) and others can then be applied.

However, if there are existing mineral exploration boreholes, which are still accessible, these can be used to provide geotechnical information, by running a suite of wireline tools and using the geophysical parameters as a proxy for geotechnical attributes. This provides an alternative means of determining the down‐hole geology and structural attributes without the need for coring and core logging. These structural and petro‐physical properties are exploited by the authors to devise a pseudo Barton Q‐Factor rock rating based on an
understanding of the geophysical properties alone.

Peter Hatherly et al., (2005) proposed a scheme for a rock mass rating of clastic sediments based on wireline geophysical measurements, which allow an approximation of rock composition. They developed a Geophysical Strata Rating (GSR), which is based on (i) the porosity determined from density logs, (ii) the clay content derived from the natural gamma (also neutron and resistivity) and (iii) rock moduli determined by sonic logs. The scheme provides a value of rock quality between about 15 and 100, whereby rock quality improves with increasing value of GSR.

In this paper, the authors use the Acoustic Televiewer (ATV), Full Waveform Sonic (FWS), P‐Wave Sonic (VL2F) and Focused Electric Resistivity (Res), to simulate the three quotients used by Barton et al. (1974) to calculate the Q‐Factor. In addition the Sidewall Stability Index (SSI, Andersen, 2015) is calculated. The wireline surveys used here were conducted in a vertical borehole drilled in the Main Zone, (anorthosite and norite) of the Bushveld Igneous Complex.”