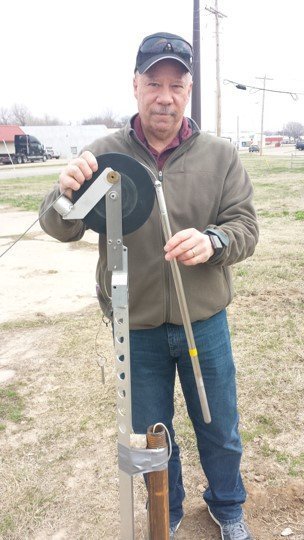 Jim LoCoco and David Huffington of Mount Sopris visited the Geoprobe headquarters in Salina, Kansas, USA to demonstrate the new 19GR Nano-Gamma probe, the world’s thinnest natural gamma ray tool. Mount Sopris visited with Tom Christy (Vice President) and Wes McCall (Geologist) to demonstrate the benefits of logging gamma ray tools inside of geo-push rods to supplement their electrical conductivity (EC) data. Geoprobe collected rate of penetration (ROP) data and electrical conductivity data when they drilled the well. The 19GR probe was ran after the drilling, inside of the geo-push rods. The 19GR was able to supplement the EC data by mapping soil horizons to distinguish between shaly and sandy material. The tool was able to distinguish the soil horizons through the push-rods that Geoprobe was looking for to validate the Nano-Gamma probe.


EC logs are based on the fluid type present. Natural gamma ray operates independent of fluid type. EC can show differences between ground water of varying salinity, hydrocarbons, and fresh water. These two tools in conjunction with each other can map groundwater, identify the extent of the subsurface affected by spills, and identify possible different fluid types at different soil horizons. Using EC and gamma together allows for greater certainty of soil horizons, especially if unsure of the fluid type. 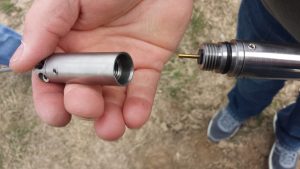 Once Jim and David were finished showing Geoprobe the benefits of the Nano-Gamma probe, Tom gave MSI a tour of Geoprobe’s facilities. They have an impressive amount of property spread throughout Salina with several buildings that range from a training center, parts service and production, to rig service and production. Jim and David would like to thank Tom, Wes, and Geoprobe for their time and hospitality to help create solutions in the shallow-subsurface. 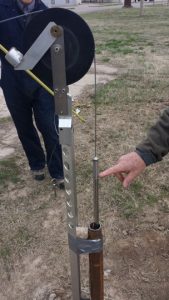 Search for a Product